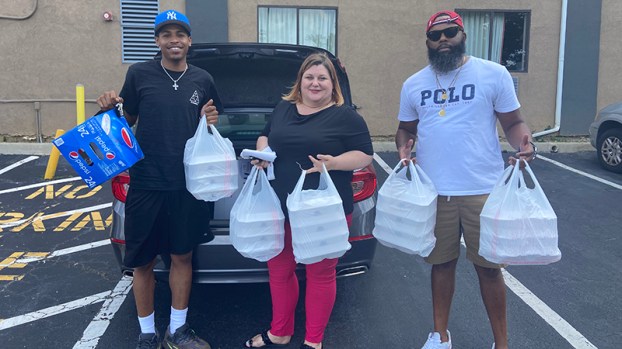 A group of businesses in Suffolk got together to donate meals to those displaced by the fire at Suffolk Towers Apartments.

Around 4 a.m. on the morning of July 13, a fire took place on the fifth floor of Suffolk Towers Apartments on North Main Street. Since then, residents have stayed at hotels until it is deemed safe to move back. Many have only the clothes on their backs.

Wall Street Cafe on West Washington Street spearheaded a movement, along with other Suffolk businesses and nonprofits, to provide meals for these families. The cafe is part of a close group of 10 businesses that want to help their community however they can. These other businesses include Enlightened Minds Mentoring, Gourmet Burger Bistro, Fanatic Enterprises and many others.

These businesses were able to deliver dozens of meals to the displaced residents on July 14-15. Meals came from Gourmet Burger Bistro, Wall Street Cafe and Soul Food Palace. The meals were donated to residents who are now staying at Super 8 Motel on North Main Street and Quality Inn & Suites on Holland Road.

“It’s an honor and a privilege to be a part of the community and come together for those in this unfortunate incident,” said Albert Hill of the nonprofit Enlightened Minds Mentoring, who passed out the meals with his son Keondre. “This particular community always comes together to provide resources in a great way.”

While delivering these meals, the residents shared their stories of the past few weeks. These residents were recently brought back to their apartments after a major water leak on June 30 had them relocated to the Quality Inn & Suites. After spending a week there, the residents returned just to move again a few days later after a fire.

Now, residents cannot go back in to get clothes for work or toys for their children. After being left with very little after the fire, this meal is a welcomed gesture.

“It’s great,” said Tamyra Beamon, a Suffolk Towers resident staying at Super 8. “Just people knowing other people are going through something. We did the right thing, and now we’re basically homeless.”

“We want to reach out with donations, clothes and see what they need long term,” said McGuire. “That is what we are working on next. It sounds like they need toys and clothes, and we want to help because that could be any of us this happens to.”