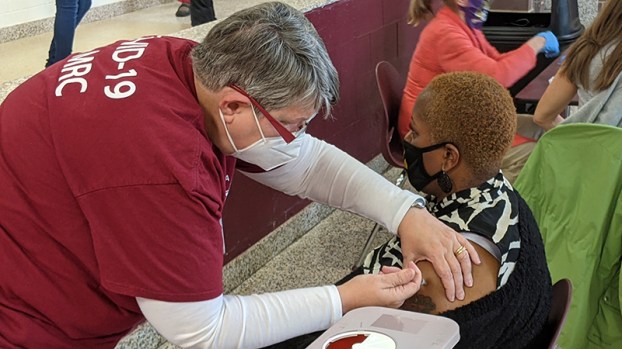 College and Career Academy at Pruden Dean of Students Dr. Tonya Spruill received the first dose of the COVID-19 vaccination last month at King’s Fork High School. The Virginia Department of Health has said that there may be delays in the state receiving its next shipment of vaccines due to winter weather in the state and across the country. (file photo)

Winter weather across the country and in Virginia will likely mean a delay in delivering about 106,800 COVID-19 vaccine doses as distribution channels shut down in the Midwest and other parts of the country.

Due to weather conditions across the state, the Virginia Department of Health, in a news release, said multiple vaccination events scheduled for the next few days have already been postponed. Should these events be postponed due to weather or shipment delays, providers will reschedule these events and contact people with directions about updated appointments.

As the winter weather ends, the vaccine shipments are expected to continue as normal.

The state department of health said the delays affect both the vaccine and its ancillary supplies, which are produced in multiple locations around the United States through the use of several hub connections to deliver vaccines directly to providers.

VDH said 2% of the state’s providers are facing delays with ancillary supply kits.

For orders placed this week, the state department of health said there could be additional delays because of the severe weather. It is issuing guidance to providers so that they can determine the status of their vaccine or ancillary supply shipments, and it is also working with federal partners to determine their statuses. It is also looking at how to manage the delay and minimize impact to residents.

Briefing Suffolk City Council during its Feb. 17 meeting, Deputy Fire Chief and Emergency Management Coordinator Brian Spicer said the Western Tidewater Health District is getting about 1,800 vaccine doses per week, with about 500 allocated for Suffolk. He said not to expect any increase in supply for at least the next two weeks.

“The vaccine supply seems to be the largest limiting factor that we’re dealing with here,” Spicer said.

Statewide, 12.1% of the population has received at least one dose of the vaccine. The city has received 10,869 doses, with 2,037 people having been fully vaccinated. Between Feb. 2 and Feb. 12, 1,392 vaccine doses were administered in Suffolk – 1,017 of that coming during the vaccination event Feb. 11 at East End Baptist Church – 730 in Isle of Wight county, 525 in Franklin and 240 in Southampton County.

Spicer said there are seven upcoming vaccination events in the health district from Feb. 17 through Feb. 23. They include:

“Most of these, especially the first dose clinics, are full at this time,” Spicer said. “The second dose ones, if not full, should be filling up pretty quickly, as those are pre-scheduled, or pre-arranged for the ones who had the first dose at that respective clinic.”

Superintendent Dr. John B. Gordon said at the Feb. 11 School Board meeting that 993 division staff received the first dose of the COVID-19 vaccine at King’s Fork High School. He spoke with state Secretary of Education Atif Qarni, who Gordon said would be reaching out to the Western Tidewater Health District to potentially set up a second opportunity for staff who missed the deadline to sign up to get the first dose.

Gordon said SPS did not run out of shots, but rather, it had a deadline for staff members to sign up in order to provide the health district with the number of people who were to receive the vaccine so it could order the proper amount of doses to be administered.

He said it would be the division’s expectation that unless a staff member has a documented pre-existing condition, staff members will be expected to work in their respective buildings because students will be in them. Vaccines are optional for staff, but he said the division would need information from a medical professional that not only would it not be a good idea to have a person with a pre-existing condition be around students, but also, that it would not be advisable for the person to take the vaccine.

“We’re going to have to take a look at that based on what the medical professionals say,” Gordon said, “(and) the documentation that we have on file in the Human Resources Department.”

Those who cannot be around students due to pre-existing conditions and are advised not to get the vaccine will likely be looked at to be virtual instructors at the elementary level. At the secondary level, those people would likely be providing support to the hybrid learning plan.

“We are going to have to take a look at each individual staff member on a case-by-case basis,” Gordon said. “But it has to make sure that it checks those boxes of, either you’ve got the vaccine or you didn’t, you had a pre-existing medical condition or you do not, or, potentially, your pre-existing medical condition was the reason why you decided not to get the vaccine. It’s really going to fall into those three categories.”

Board attorney Wendell Waller noted that an employee cannot lose their job because that person chose not to get the vaccine, as they were approved by the Food and Drug Administration under an emergency use authorization.
Waller said he is looking into “whether the knowledge of whether they took a vaccine or did not take a vaccine, whether that’s going to be protected information” under the Health Insurance Portability and Accountability Act of 1996, or HIPAA.

Staff members without a pre-existing medical condition who choose not to get the vaccine will still be allowed into schools to teach, Gordon said.