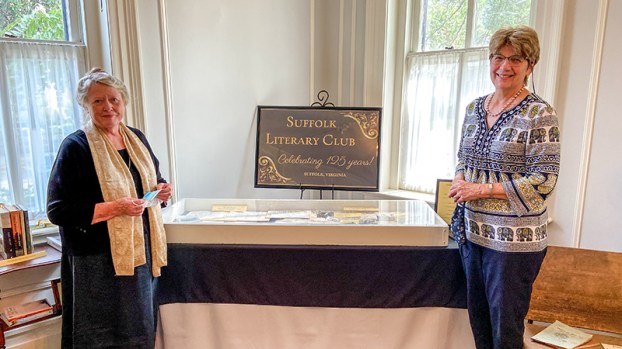 Sue Woodward and Lynn Cross prepared an exhibit to celebrate the 125 anniversary of the Suffolk Literary Club.

The second oldest literary club in Virginia celebrated 125 years with an exhibit that barely had the chance to shine.

The Suffolk Literary Club was started in 1894 by a group of Suffolk women who wanted to study literature. The club still meets every month and held a display at the Phillips-Dawson House to show pictures, newspaper clippings, gloves, teacups and other artifacts from the beginning to the present.

“This exhibit was to tell a story of the organization and its 125 years,” said Lynn Cross, member of the Suffolk Literary Club and chair of the exhibit.

To celebrate the opening of the exhibit, the club held a tea on March 12. Unfortunately, COVID-19 shut the world down soon after.

Every significant anniversary, the Suffolk Literary Club hosts an author to come and speak. This year, the club’s theme was “The Transforming Power of Nature.” To go with this theme, Earl Swift was to visit the Suffolk Center for Cultural Arts to talk about his book, “Chesapeake Requiem: A Year with the Watermen of Vanishing Tangier Island.”

“We are still planning on hosting Earl Swift,” said Cross. “We just have to push him back to sometime next year.”

As the Suffolk Literary Club celebrates its history, the club recognizes the women who have been a part of this club. Members include Daisy Nurney, who suggested the name Ruritan when the organization began in Holland; Mrs. John Bearegard Pinner, who owned the Pinner House; and many others, including the superintendent of schools, judges, lawyers, and teachers.

The club dove deep into literature, but also kept their community in mind. The club participated in international causes like being the first club to organize and work as a unit for the Red Cross in both world wars, adopting a French orphan during World War I, and knitted sweaters for soldiers in World War I.

Local projects included originating the idea of beautifying the highway, creating and fostering the Woman’s Club, starting the first lending library, and sponsoring a library for soldiers.

“With not having a library in Suffolk, they had to rely on either their personal libraries or a friend’s library to do any research,” said Sue Woodward, co-historian and member of the Suffolk Literary Society. “Today, most of us rely on computers to do research, but they didn’t even have a public library to go to.”

The Suffolk Literary Club today is made up of 30 members that rotate through hosting their monthly meetings. Becoming a member of the club is put to a vote once a member has left unless she is a direct descendant of an original member.

“We keep the number down to 30 because we meet at houses, and it’s a stretch to get that many into a home,” said Woodward. “The original members only had 15, which would have been easier.”

The Suffolk Literary Club is moving forward with a new theme and plans to do virtual calls for their monthly meetings. The theme for the 2021 year is “Women of Strength.” Readings will include poems by Maya Angelou, “Ten Days in a Mad-House” by Nellie Bly, and “Why They Marched” by Susan Ware.

After 125 years of Suffolk women meeting together to read and better their community, the Suffolk Literary Club shows no signs of slowing down.