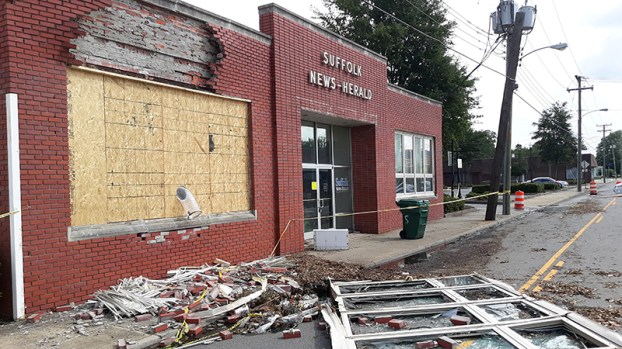 News-Herald to move to temporary office

The Suffolk News-Herald will move to a temporary office building beginning Monday as recovery and repair efforts are under way at the newspaper’s South Saratoga Street office.

The newspaper’s home at 130 S. Saratoga St. sustained heavy damage as a result of the EF-1 tornado that hit downtown Suffolk early Aug. 4 during Tropical Storm Isaias. The roof is partially caved in or missing, a set of windows in the front was blown out, the roll-up door in the warehouse is partially missing, and a lot of rainwater was able to invade the building due to the structural damage.

News-Herald staff will move to a leased space at 157 N. Main St. while repairs to the building are under way. This space, right across from the Godwin Courts Building, was previously the offices of the Virginian-Pilot’s Suffolk bureau.

People who need to reach the newspaper can call 757-774-6632 or email news@suffolknewsherald.com.

“Our commitment to the Suffolk community will not change,” Editor Tracy Agnew said. “We will just be operating from a different location temporarily as we continue to produce our Wednesday and Sunday print editions and publish news around the clock on www.suffolknewsherald.com.”

City bruised by tornadoes, but cleaning up

Margaret Babb earned the purple bruise she got on her arm, courtesy of the EF-1 tornado that snapped a large... read more