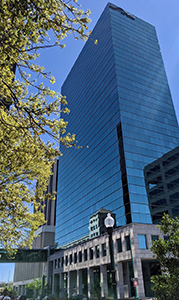 TowneBank and the Children’s Hospital of the King’s Daughters on Tuesday completed the purchase of the Norfolk Southern Tower in downtown Norfolk. (submitted photo)

TowneBank expands Norfolk presence, but still based in Suffolk

TowneBank and the Children’s Hospital of The King’s Daughters on Tuesday completed a purchase of the Norfolk Southern Tower in downtown Norfolk, but TowneBank says its headquarters will remain on its 40-acre campus in Harbour View.

The bank and children’s hospital partnered on the purchase from Norfolk Southern, which is moving its corporate headquarters to Atlanta. Norfolk Southern will continue to lease several floors until the end of 2021.

“We’re very excited about the building,” TowneBank Executive Chairman G. Robert Aston Jr. said in a Wednesday press conference held on Zoom. “It just ends up being a wonderful thing for the city, for CHKD and for the bank.”

Upon termination of the Norfolk Southern lease, the building will house the headquarters of Towne Financial Services, including about 400 employees in TowneBank Mortgage, Towne Insurance and Towne Benefits.

Not only will the bank’s headquarters remain in Harbour View, but also TowneBank’s Norfolk Main Office and Corporate Banking Group will remain in their current downtown Suffolk locations.

Aston said the move to the tower would consolidate several office leases and reduce those costs by about $1 million per year.

CHKD ultimately plans to relocate about 475 members of its workforce into the downtown building, including information services, patient financial services, human resources and health system administration.

CHKD President and Chief Executive Officer Jim Dahling said Wednesday that the new building would help the hospital move office functions out of much-needed space on its campus that can be converted to clinical use. The hospital, like the bank, also will be able to eliminate lease costs, allowing it focus even more on serving children and their families.

“The decision to jointly own this building represents the most time-sensitive and cost-effective solution to critical space shortages for both our patients and our staff, including expediting our ability to bring much-needed mental health services to children in advance of the opening of our new mental health hospital and outpatient services tower in 2022,” Dahling stated.

Nearly 900 people will eventually work in the tower, several hundred more than are presently there from Norfolk Southern. Alexander touted downtown Norfolk’s 30,000 good-paying jobs and 7,000 residents.

He said he wasn’t too concerned about the downtown economy when Norfolk Southern announced it was leaving.

“Norfolk is a highly sought-after location for businesses, so we were very confident that building was going to be taken,” Alexander said.

Also purchased Tuesday was the nearby Commercial Place parking garage owned by the city of Norfolk. TowneBank and CHKD will use this parking garage exclusively for their employees and guests when they move into the office building.

Alexander said the money from the purchase will go into Norfolk’s parking fund to help address deferred maintenance and other needs.

TowneBank also announced Wednesday it will donate the net proceeds of Norfolk Southern’s lease payments through 2021 to CHKD’s current campaign to build a mental health hospital for children on its Norfolk campus. That donation is expected to be approximately $1.3 million.

At the request of Norfolk Southern, TowneBank and CHKD declined to reveal the price of the acquisition.

Board responds to Story lawsuit