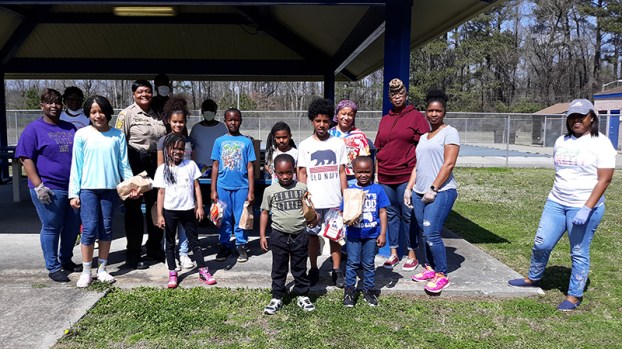 Volunteers and children hand out and receive meals at the Hollywood pool on Thursday afternoon.

Group hands out dozens of meals

A group of locals that has been distributing food at parks this week said they gave out about 100 lunches the first three days of the giveaway and are planning to keep it up as long as possible.

Veronica Woodson, who is a deputy with the Suffolk Sheriff’s Office, started the effort and has received lots of support from family, friends and others, she said.

The distributions on Monday, Tuesday and Wednesday in the Saratoga, South Suffolk and Lake Kennedy neighborhoods, respectively, brought out more children each day, with about 60 visiting Lake Kennedy Park on Wednesday.

Woodson said she got the idea to do it over the weekend, after school closures were announced due to the COVID-19 pandemic. Many of her family and friends chimed in not only with moral support but also by helping with the packing and distribution, buying food and supplies and donating money.

“A lot of the kids depend on school lunches,” said Shameka Council. With it becoming increasingly clear that the pandemic may take months to solve, Council added, “Some parents may need to save some of their income to purchase food later on.”

At the pool and playground in Hollywood on Thursday afternoon, the volunteers used hand sanitizer and put on gloves and masks. They set up bags on a table under the picnic shelter and handed them out to local children who arrived on foot and in parents’ and grandparents’ cars.

Council has also been doing mobile drop-offs at other locations, including on Wilson Street and Hill Street.

“I’ve always been involved to give back,” volunteer Iyasha Edwards said. “It’s in my heart to just help and serve and do for others.”

Staci Boone and Tamia Holland were among the other volunteers at the Hollywood pool on Thursday.

The distributions will take place from noon to 2 p.m. — a change from the previously announced time — at the following locations this week and next week. Pizza is planned for this Friday.

The volunteers said they plan to keep it going if the school closure lasts beyond next week, and if it does, they will probably change up the locations.

“Can you imagine having a chisel and hammer pounding your joints, causing the worst pain imaginable?” That’s the question Ayana... read more