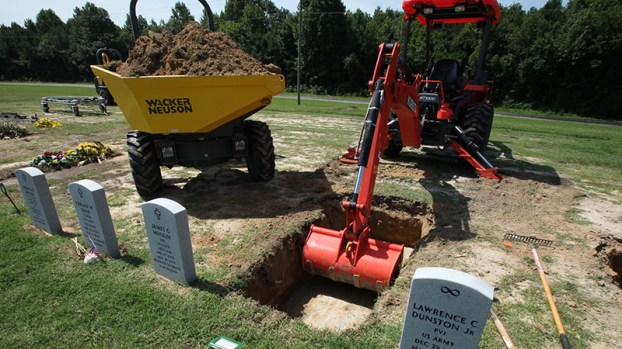 A history lesson in the field

Herbert Horst, a World War II veteran, was one of thousands of military veterans who choose to find their final resting place at the Albert G. Horton Jr. Memorial Veterans Cemetery.

Each year, the 74-acre cemetery averages 1,200 burials, according to Dan Kemano, cemeteries director and a retired U.S. Navy Command Master Chief. Horst was interred on July 29, 2019.

Kemano oversees all three state veterans’ cemeteries in Virginia — one in Dublin, one in Amelia and the one in Suffolk. Suffolk, opened in 2004, is by far the most active.

As the cemetery becomes increasingly known, it is undergoing yet another expansion that will make burial space for 7,000 more veterans and their spouses. Currently the cemetery has 12,000 veterans and family members interred.

Thanks to a $10.2 million federal grant to the Virginia Department of Veterans Services, the 10-acre expansion includes three new burial gardens with 7,108 pre-installed, double-depth burial crypts. The raised gardens have been designed and built with drainage systems. After the crypts are in place and covered with three feet of earth and turf, they can be efficiently accessed as needed, opened for secure burials, closed, re-covered with grass and marked with appropriate stones.

The work at the cemetery also includes a renovated cemetery administration office and a backup power system. Passersby will also notice new wrought-iron fencing lining Milners Road along the cemetery boundary, a wider main gate to facilitate the entrance of larger trucks onto the property and a new stone sign on the corner of Lake Prince and Milners roads.

When Horst enlisted in the U.S. Army in 1943, his life changed radically from an elite public high school in Brooklyn, N.Y., to the glass-enclosed bombardier’s perch at the nose of a B-29 bomber. He was 18, a slender, hazel-eyed student when he chose to enlist because, according to his son John Horst, Herb had been raised to do the right thing.

The Army recognized Horst’s aptitude for math and science and trained him as a bombardier, a position that required learning celestial navigation as well as mastering the Norden bombsight. Horst also cross-trained as a navigator.

His service with the 6th Bomb Group of the Army Air Forces took him to Tinian Island, one of three islands from which the United States launched massive aerial attacks on the Japanese islands, leading up to Aug. 6, 1945, when Gen. Paul Tibbets dropped the first atomic bomb over Hiroshima.

Aboard Horst’s bomber, the Flak Alley Sally, the crew of young airmen quickly established a bond that endured for the rest of their lives, a camaraderie forged through combat and close calls with disaster. From his bombardier’s post, he had a clear view of incoming flak, including one fiery chunk that penetrated his “bubble” and landed at his feet, leaving him unscathed.

Discharged in January 1946 as a first lieutenant with the Distinguished Flying Cross, the Air Medal and several campaign medals, Horst used the GI Bill to graduate from Columbia University in New York, and worked for DuPont de Nemours, Inc. as a mathematical statistician. Horst was also a quiet but active community volunteer, He and his wife, Alice, raised their three children in Kennett Square, a suburb of Philadelphia, Pa.

When asked to host a foreign exchange student for a year, they agreed. However when they learned that the student was from Japan, Horst worried about the boy’s comfort level in the home of a World War II veteran of the war in the Pacific.

When another placement failed to work, however, Horst agreed to take in Masaki Kobayashi. When the boy, who immediately called Horst “Dad,” asked about the silk flag of Japan he saw hanging on the wall, Horst called the student’s father and explained that 24 years earlier he had been dropping bombs on Japan. Was that a problem?

“Not at all,” answered the Japanese gentleman.

That year-long visit prompted a lifelong international friendship between the two families with visits, letters and phone calls back and forth, said John Horst.

Later in life, Herb and Alice moved to Suffolk and were active members of Main Street United Methodist Church.
Rarely did Horst speak of the war, but he maintained a close relationship with several of the Flak Alley Sally’s crew, and attended the Bomb Group’s reunions with his son, John. It may have been his abiding respect and affection for those men, and his respect for his other comrades, that influenced his decision to be buried at the veterans’ cemetery, among those who have shared the military experience.

Stylist to stars, but Suffolk is home

LaTroy Brinkley is the owner of Serendipity Hair Salon in downtown Suffolk. A Suffolk native, Brinkley, 42, has built a... read more