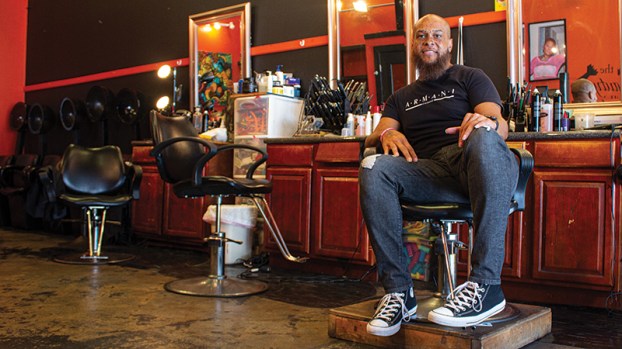 Stylist to stars, but Suffolk is home

LaTroy Brinkley is the owner of Serendipity Hair Salon in downtown Suffolk. A Suffolk native, Brinkley, 42, has built a reputation with his services that’s based on years of experience and a commitment to his local community.

His hair-cutting career started at Virginia State University, from which he graduated in 1999. He would cut guys’ hair in the dorm, then began to style ladies’ hair for a bit more money.

He was part of the Virginia State University Gospel Chorale — as well as the director of it from 1998 to 2001 — and he got more hairstyling practice traveling when he helped the ladies shine for competitions.

“I started investing in little things like hot curlers, combs, that sort of thing,” Brinkley said inside his salon on West Washington Street. “It was just something to do. I never thought it would matriculate into what I do now.”

After college, Brinkley came back to Suffolk and started cutting hair at the Chop Shop, also on West Washington Street. It was during his time at the Chop Shop that a client nominated the shop for the Steve Harvey Morning Show’s annual Neighborhood Awards in 2010.

The Chop Shop was nominated for best hair salon. They didn’t come in first place, but business picked up sharply after that recognition, he said.

“After that business started to boom, so I opened my own salon,” he said. Serendipity Hair Salon hit the six-year mark on July 3.

Brinkley’s momentum at that point led him to meet Johnny Wright, the personal hair stylist for First Lady Michelle Obama for both of President Barack Obama’s terms, from 2009 to 2017.

Wright took Brinkley under his wing and became a crucial mentor for the Suffolk hairstylist. Brinkley even got to work with him during Obama’s second inauguration in Washington, D.C., styling other people at the event while Wright worked with Michelle Obama.

It was a surreal, nerve-wracking experience and the highlight of Brinkley’s career, and he credits Wright for all of his guidance and support.

“Working with Johnny and seeing what he does and how he does it — because this is an ever-changing career — I learned a lot from him during that time. I learned the business aspect from him, as well as the hands-on (aspect),” Brinkley said.

With Wright as his mentor, Brinkley became part of the “influencers circle” for “L’Oreal’s Soft Sheen-Carson” brand in 2011. He also became the executive hairstylist for the Neighborhood Awards in 2014, before the awards were canceled in 2017.

From then on, he began meeting his celebrity clients like American Grammy-winner Erica Campbell, Tami Roman of the “Basketball Wives” television series and comedians Sheryl Underwood and Mo’Nique.

Mo’Nique was Brinkley’s first celebrity that he personally styled for, and although he was nervous at first, the two ended up working well together.

“It turned out to be a good working relationship,” he said. “Whenever she came to the area, she would call and I would style her, so it turned out pretty good.”

When Brinkley’s clients come in for deep conditionings, hair extensions or whatever else they desire, he aims for a comfortable, stress-free experience with fun conversation and a break from the daily grind.

Clients get their hair cut to their liking and then stop by the Uncork’d wine shop next door, head across West Washington Street for Sushi Aka’s menu or to the Plaid Turnip, Brighter Day Café’ or another downtown restaurant.

“When they leave out of here, I want them to feel like a million bucks, and that’s what they do,” he said.

Some regulars — people he’s met on the road traveling — come from as far as North Carolina and Washington, D.C., to get their hair cut by Brinkley, he said. In Suffolk there are pastors’ wives, Sentara Obici staff and city officials that come to his salon. Even classmates of his from his Lakeland High School days — plus some from even further back than that.

“One of my clients now was my speech pathologist when I was in second grade,” he said.

He has gotten good support his friends and family, his two children attending Virginia State University, and another in middle school that just turned 12.

He recalled how his dad was skeptical about his career change at first. Brinkley left a job at Verizon to pursue haircutting full time, he said, but now his dad sees how rewarding it is.

“My dad has been a great supporter, but all of my family … they know I work long hours and travel a lot, so it’s always, ‘Hey, have you eaten? Come by and pick up a plate on your way home,’” Brinkley said.

Brinkley’s services also go beyond Suffolk’s proms, weddings and funerals and into those in the community that need the most help.

He’s previously served on several boards, including Suffolk Clean Community Commission, Suffolk Office on Youth and the Suffolk Redevelopment and Housing Authority. He’s currently on the board for the Salvation Army of Suffolk, ringing the bell outside of Walmart during the Christmas season for donations.

He and his fellow haircutters locally giveaway free haircuts, especially for underprivileged children when it’s time to go back to school, and also for empowering women through Dress for Success Hampton Roads.

Brinkley gives back to his hometown, both in and out of his salon.

“This is home, and home is where the heart is,” he said.

Global influence of Suffolk’s agriculture and food scene has been growing in recent years. A prime (and tasty) example? Soybeans... read more