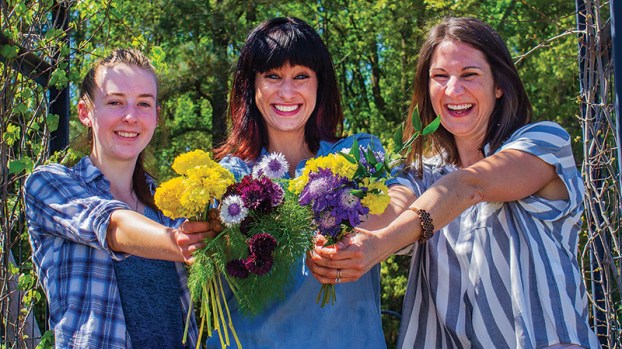 A new Hope for Suffolk

As Hayden Blythe walks amidst the yarrow, larkspur and other flowers in Hope for Suffolk’s community garden at Westminster Reformed Presbyterian Church, she sees the growth as an allegory to the teenage students who will be participating in the revamped program.

Starting as a seed, the students have much in the way of potential, but like the flowers that need the backbreaking TLC, they need people to invest in them, too.

“Some of these kids have that already, and we’re just another factor,” says Blythe, director of the Hope for Suffolk program. “Some of the kids don’t have a whole lot of that. Seeing them growing something from nothing into this beautiful thing that somebody wants to buy is kind of like an analogy to what they do.”

On a warm spring day, Blythe, Farm Manager Meredith Alphin and Assistant Farm Manager Sierra Bernacki were out in the field tending to the field’s growth, and as spring turns into summer, they’ll be alongside the students, helping tend to their growth.

“Our blood, sweat and tears are literally in this garden,” Alphin says. “All those things have literally happened.”

Bernacki started out in the program as a volunteer before becoming part of the Hope for Suffolk staff. She always knew working in a community garden was something she wanted to do.

“I’m working my dream job here, actually,” Bernacki says. “I want to get into horticulture. I don’t mind getting my hands dirty. I enjoy weeding, as weird as it sounds.”

Walking through the garden, Alphin notes that not all the flowers are native to Suffolk, but they are all ones that do well with its climate. They planted a mixture of hardy annuals, half of which were planted in the fall and winter over, and then planted the other half earlier this spring. They just put out all of its warm-season tender annuals, such as zinnias, cosmos, basil for filler and ageratums.

The program, which began in 2010, started out working with adults and grew vegetables, but due to a few issues, transitioned this year to working with teens and growing flowers.

In recent years, it was getting more difficult to keep adults in the program longer than a couple of weeks, Blythe says, with pests and disease issues also becoming problematic. Those things, along with a personal interest in flowers, gave Alphin the impetus to try something new.

“It’s always been a bucket list item of mine to try cut-flower farming,” Alphin says. “We also wanted to give the land a rest from intense vegetable production.”

The flowers grown in the garden are being sold to the public through a Community-Supported Agriculture, or CSA, program, which started May 1. People can purchase full or half shares in the program.

Under a full share, which costs $50 per month, people will get a weekly bouquet of flowers that consist of 10 to 12 stems. Those paying the half-share cost of $25 per month will receive a bouquet every other week.

“Even though we’ve switched to flowers, we’re still doing all organic and we use very sustainable farming practices,” Blythe says, “which means it’s a whole lot of backbreaking, arm-breaking work.”

It’s a lot of manual labor — something the program needs, because the interns who will be working the field need work to do. They hand-weed everything and don’t use traditional farming methods, as Hope for Suffolk is trying to run a work program and a small business.

They are pumped by the young people — people ages 15 to 20 years old — coming into the program this year. Through a partnership with Suffolk Public Schools, the teens are chosen through an application and interview process. They ask students to commit to a seven-month program, and while they get paid for the internship, they also get community service hours for the life-skills classroom training they undergo.

“I’m personally excited by the kids we’ve got right now,” Alphin says. “I think it’s awesome, and it’s really fun to work with a younger demographic.”

Currently, the program has nine teens in it, who work one day per week during the school year, and two days per week in the summer. Workshop-style classes, which take place once per week, began in May. Blythe says they plan to expand the scope to include up to 15 students.

Swapping chickens on a Saturday