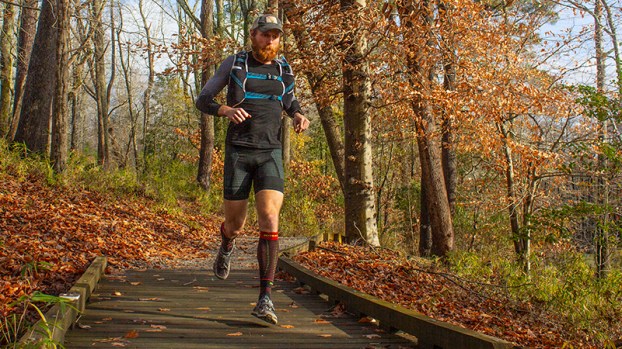 Going for that extra mile

They sweat and toil and ache, no matter the environment or the weather, but for some dedicated runners, that’s the only way they can move forward. There are runners in Hampton Roads that have sped across monuments. Some will scale mountains and others have already made history.

But why do they put in the time and pain in the first place? For Suffolk resident Lisa Davis, 49, it’s simply become a habit. One that pushes her almost every single week.

Davis is a retired Marine and a jet-setting ultra-marathoner. She completed the “Triple 7 Quest” in January 2017 — running seven marathons on seven continents in just seven days. She and the eight others in her group ran 26.2 miles each in Australia, Singapore, Egypt, the Netherlands, New York, Chile and Antarctica.

Later that May, she flew to China for the 26.2-mile Great Wall Marathon, with plenty other races in between.

“I actually lose track of these races some times,” Davis said, laughing.

She accomplished numerous ultra-marathons, marathons and half-marathons in 2018, and celebrated the new year with her shoes tied for the “The River Loop 24/12/6 Hour Races and Relay” in Mills River, N.C. from Dec. 31 to Jan. 1.

For Davis, it’s about the adrenaline.

“I’m addicted to running,” she said. “I’m quite literally addicted. I’m always looking at my next race. It’s the thrill of running. I can’t see myself doing anything differently.”

Another Suffolk veteran spent 2018 preparing for his own monumental experience. He trained for months, then flew to New Zealand to face the “Revenant.”

Suffolk’s Chadd Wright, 31, and his partner Shawn Webber will be among the world’s toughest athletes when they compete in the Revenant, a three-day Ultra Adventure Run from Jan. 18-20 in New Zealand.

According to revenant.co.nz, racers begin at Welcome Rock, in the mountains bordering Southland and Central Otago. Individuals and two-person teams like Wright and Webber have no support between checkpoints that span more than 110 miles, across terrain that varies from alpine grassland to ravine-like forests, and with more than 105,000 feet of vertical ascent and descent.

There are no markers in the highs and lows of these checkpoints. Racers only have a compass, map and their own planning to find the finish line with just 60 hours on the clock.

Wright was in his final week of hard training towards the end of December. He started in July by running 40 to 50 miles each week, plus strength work.

“I’d pull a tire for three to four miles, and really just build up a good base of leg strength,” he said.

Weeks in December escalated from 85 miles, then 90 and about 111, with more than 30,000 feet of vertical climbing under his belt, partly by treadmill running with the incline set higher and higher. He also trained at Merchants Millpond State Park in North Carolina.

“It’s a really technical, single-track trail,” Wright said about the park. “It’s got a lot of roots and a lot of obstacles, and it requires you to really work on your reaction time and your foot placement — all that good stuff.”

Wright based his training on his years of running marathons and other races. The Navy veteran has come to love the brutal honesty that comes with the sport.

“It really just simplifies life,” he said. “When you’ve been out on the trail for 24, 30 or 60 hours — whatever it is — you get into this primal state of mind and everything is so simple. It’s almost a spiritual experience, I guess. There’s no other way to simulate it other than putting yourself in those really difficult situations.”

He’s also become part of a community of ultra-marathoners that share his crazy passion, including his partner Webber.

He said that with less than 30 miles to go, the two went back-and-forth leading past one another on an infamous stretch of up-and-down mountain trail called “the Dragon’s Spine.” Their bond was forged before they finished the race.

“We went through that hard time, battled and forged (that bond). Now Shawn and I have a special relationship and go out and train together,” he said. “It allows us to understand each other better, and we basically work together flawlessly.

“Everything flows with no strife or competitiveness. (It’s like) we work as one person.”

Working as one, cohesive unit is what Michael Davis, 34, and Ashton McCormick, 19, do best. It was through their teamwork that they made history in the 2018 Boston Marathon.

Davis, a Suffolk resident who is legally blind, pushed Chesapeake’s McCormick, who has autism, as McCormick sat in his race chair. Davis ran steadily behind his guide runner, Joe Orth.

When they crossed the finish line through heavy rain and bitter wind chill, they became the first team of a blind runner pushing a disabled athlete to finish the marathon.

“It was extremely cool,” Davis said about the feat.

Davis has been racing with McCormick since 2012 when the two met through Team Hoyt, an organization of runners who push riders with special needs. They became “Team Pretzel Hands” after McCormick’s love of Rold Gold Tiny Twists pretzels.

McCormick enjoys them between his fingers in every race.

“He dresses appropriately for the weather and always has his pretzels. Always, always, always,” Jennifer McCormick said. “He lets me know when I forget them.”

He’s done more than a dozen races since Boston in March, including the Surfers Healing 5K, the Rock ‘n’ Roll Virginia Beach Half Marathon and the Marine Corps Marathon.

Jennifer McCormick said her son loves the atmosphere of the more serious races, and for the lighter occasions, it’s simply about spending time with whoever is pushing him.

“For races it’s the crowds, the noise, the music and all the people, but for fun runs it’s the relationship (he has) with the person that he’s running with,” she said.

Davis is an avid marathoner who’s still hungry for the sport. But for him, it’s not just about pushing himself. It’s about pushing other disabled athletes like him.

“I enjoy making sure that somebody who has a disability that wouldn’t normally be included gets included in the race. That’s the main reason I do it,” he said.

Whatever the reason, these runners are still doing it, and they’re doing it well.

Story by Phyllis Speidell Photos by John H. Sheally II The party lights were on when thousands of music fans... read more