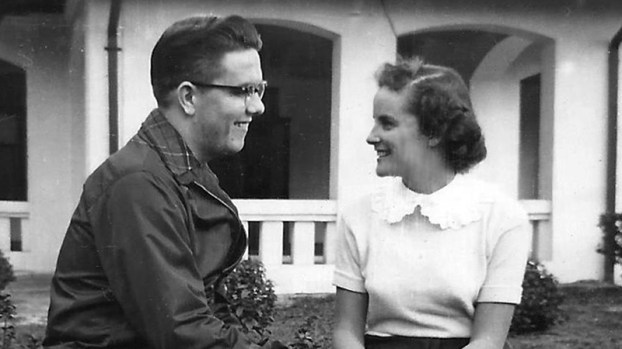 The moment John Banks saw Jeanne at Columbia Bible College in South Carolina, he knew that was the girl he wanted to end up with.

And he did. They recently celebrated their 66th anniversary on Aug. 30.

“I would say I knew right away that I liked him,” Jeanne Banks said. “We had similar interests and backgrounds. Family, friends and faith were important to both of us.”

Just a year after they met, they were getting married at Alliance Church in Portsmouth on Aug. 30, 1952. Not long after came the babies, and before she knew it, Jeanne was the mother to five children.

“We sure did it in record time,” John said.

Ever since they were married, their lives have been one adventure after the other, and as a married couple they traveled and saw the world while John was an Army chaplain.

Because of John’s work as a minister and an Army chaplain, the couple moved with their five children 27 times before retiring to Suffolk.

With all the moves and five children to take care of, the lovebirds learned patience, and for Jeanne, she believes that was the secret sauce to a successful marriage.

“Patience is key. John had finished seminary school and went to his different churches before going over to Vietnam. After that, he was off to Korea. With five children, patience and faith were important,” Jeanne said.

No matter what problems they faced as a couple and as a family, Jeanne knew patience was the key to making it to the next day. She believes that can be true for every couple.

Jeanne knows she learned her patience from her faith, and even if John wasn’t a minister, faith was an important part of their relationship together.

“It was a basis for me and John, and it helped us develop patience,” Jeanne said. “Faith was helpful, because no matter where we moved, the church was always there to help. They were so gracious.”

As they grow older, the couple continues to work at their relationship, and at this stage in their lives, they just make sure to keep talking to each other.

“We just keep encouraging each other,” Jeanne said. “Health takes its toll, but we are fortunate to have someone to take care of us.”

Attorney General Mark R. Herring is warning Virginians, particularly those who live in the Hampton Roads region, of scammers who... read more