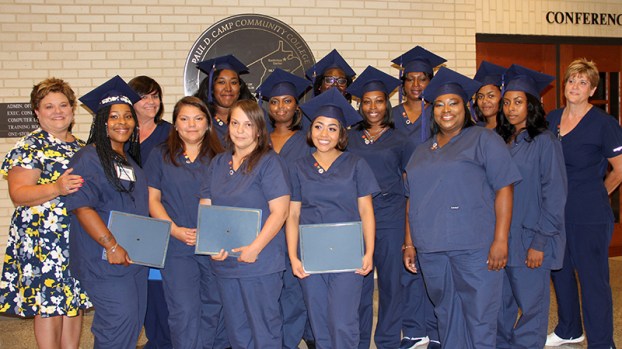 A completion ceremony for the first class of graduates from the Fast Track Healthcare program at Paul D. Camp Community College was recently held at the Regional Workforce Development Center in Franklin.

Fourteen women, including two set of sisters, set an extraordinary precedent, as the college touts a 93 percent pass rate on the National Healthcareer Association certification exam, according to Workforce Development Director Angela Lawhorne. “Virginia’s pass rate was 61 percent, and the national rate was 67.5,” she added. “They have really set the bar high for future classes. Additionally, four of the women had no prior medical experience.”

The non-credit FastForward program, initially intended to train for a career in clinical medical assistant, was expanded by lead instructor Dawn Womble to include credentials in phlebotomy technician and EKG technician. She had the program up and running after just five months of planning and coordination.

Pastor Patricia Brown of Faith Works Fellowship Cathedral in Franklin, served as guest speaker during the ceremony. She likened the first graduating class to the raising and ripening of vegetables in a garden, based on fond memories of her own father’s green thumb.

“Everything has a season,” she said, “and it is your season.”

The following awards were presented for classmate selected honors:

The following awards were presented for instructor selected honors:

Guests were able to tour the Fast Track Healthcare facility following the ceremony. For more information about the program, log onto www.pdc.edu/workforce-development.

Tommy and Dolly Holland share the blessing that they were married on Sunday, Aug. 5, 2018, in Great Bridge Baptist... read more