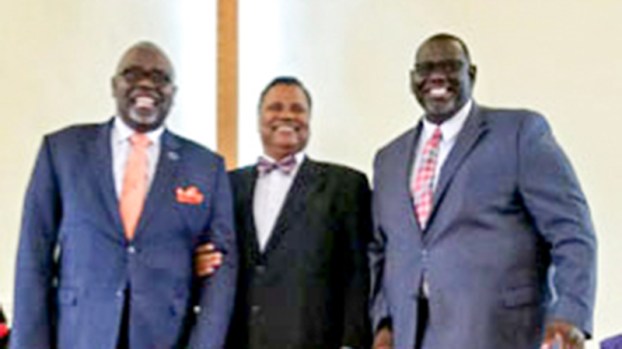 Churches worship together after 133 years apart

Prior to the formation of the Roanoke Missionary Baptist Association in 1866, freeborn black men like Lemuel Washington Boon, J.T. Reynolds, Charles E. Hodges, Willis Hodges, William Reid, and Willis Arterbridge met in secrecy in order to formulate an association of their own to include all of the tightly knitted churches of the free people of color.

These men yearned for an association that would not require them to sit in the “black pews.” They came from areas ranging from North Carolina to Roanoke Island, to the Old Dominion cities and boroughs of Fentress, Norfolk, St. Brides, Princess Ann County, Whaleyville and points beyond, because they were simply sick and tired of being tired.

After the formation of the Roanoke Missionary Baptist Association, the founders traveled the long winding roads and muddy streams preaching the gospel of love to former slaves.

The founders actively participated in the monthly activities of the rural association with churches from Manteo to Northampton County, N.C., and from Robersonville, N.C., to Princess Ann County. The association grew exponentially and functioned cohesively for the next 20 years.

However, during the 1885 annual session held with the Church of Christ at Providence, Edenton, Chowan County, N.C., some unusual events occurred. First, “owing to some misunderstanding on the part of the chair during the first day’s sessions, it was harmoniously settled by the Moderator begging to be excused.” Secondly, the ordained elders from beyond the Chowan River in Hertford County N.C., refused to accept the positions whereto they were elected. Thirdly, on motion, T.M. Collins was empowered to grant letters of dismissal to 38 churches that petitioned.

In May 1886, the association convened at Antioch Church, in Camden County, with many of its most stalwart members being absent. The Revs. C.M. Cartwright at First Baptist Severn, H.H. Norman at Second Baptist Colerain and M.W.D. Norman at Zion Hill maintained their pastorates within the Roanoke Missionary Baptist Association, although their churches were members of the splinter group, the West Roanoke Missionary Baptist Association, then known as the Upper Bound Union Meeting.

In accordance with the call issued by the Upper Bound Union Meeting, several churches convened at Zion’s Grove, Hertford County, N.C., in May 1886. The churches were called for and 37 enrolled. As some churches which had been dismissed from the Roanoke Missionary Baptist Association had failed to obtain letters, the following motion prevailed: “That all churches that can satisfy this body that they have been properly dismissed from the Roanoke Association may become members of this body.”

The Rev. William C. Clark’s ministerial support in this endeavor was invaluable. The two associations and their representatives ended the joint worship service by taking a joint service picture that included 60 ministers.