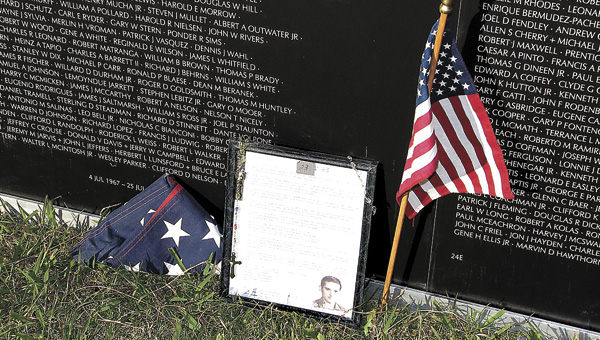 Honoring the fallen: A folded flag and framed letter honor one of the thousands of people whose names are inscribed in a replica of the Vietnam Veterans Memorial Wall. The tribute, which honors American casualties of all wars, is open through today.

Charles Nichols stood near the parking lot at Bennett’s Creek Park most of the day Saturday, offering friendly greetings to everyone who came to view the American Veterans Traveling Tribute.

The exhibit, which includes an 80-percent scale replica of the Vietnam Veterans Memorial Wall, drew hundreds of people in a steady stream throughout the day. It closes and moves on to its next stop at 6 p.m. today.

“Do you know how the wall works?” Nichols asks each visitor. Unlike the thousands of names behind him, he came home alive from Vietnam. He was there in 1966 and 1967 as part of a military police unit.

“It’s a way I can honor the veterans that died,” Nichols said of his volunteerism at the exhibit. “I think they would like me to be here.”

Once past Nichols’ helpful post, however, the mood is somber. Couples, families and friends search the wall together for their loved ones’ names, while a handful of folks arrive alone.

The exhibit, which included memorials to all wars America has been involved in, was brought to Suffolk by R.W. Baker & Co. Funeral Home to mark its 125th anniversary.

One man approaches the wall slowly, first pausing several feet away and getting progressively closer. Once there, he runs his hand flat against the slightly raised text that forms all 58,000-plus names.

Soon, he is kneeling next to the wall, bracing against the black panel as he sobs uncontrollably. A couple of kindhearted strangers rush to his aid and help him take rubbings of several names on the same panel. Through his tears, he tells them about the names.

On the other side of the park, a handful of local military personnel began at 5 p.m. taking turns reading the 344 names on the wall that hailed from Hampton Roads. An audience of about 30 sits attentively through the entire list, offering a smattering of applause when the reading is over.

Carroll Williford and her family were among them. She brought her husband and two daughters to the memorial, even though they attended the 1982 opening of the Washington, D.C. memorial.

“That was really something I wanted to see,” Williford said. “We’ve never been to the roll call.”

Williford was 10 years old when her Army father, Marshall Eugene Robertson, from Portsmouth, was declared missing in action. The family never really knew what happened to him until years later, with Keith Nolan published his book “Death Valley,” detailing the events of August 1969. That’s when they found out Robertson had been shot in the head, only six weeks before he was supposed to come home.

“He wasn’t going to leave those guys out there,” Williford said, recounting the story of how her father hopped on a helicopter to help a group of soldiers barely out of their teens. “We’re very proud of him.”

A few panels down, Gordon and Michele Gould let the tears flow as they locate their friends’ names on the panel. Michele went to high school with Tommy, one of the many names on the wall. There’s even a yearbook photo of her wearing Tommy’s football uniform while riding on a float in a parade. She dug it out earlier this week to show Gordon, who came Saturday to seek out names of the men in his father’s Air Force unit who didn’t arrive home alive.

“The biggest thing is just to remember people,” Gould said.

The exhibit will be on view until 6 p.m. today at Bennett’s Creek Park, 3000 Bennetts Creek Park Road. For more information, visit www.freedomtribute.com.

Posting of colors by Troop 41