A simple gift between schools 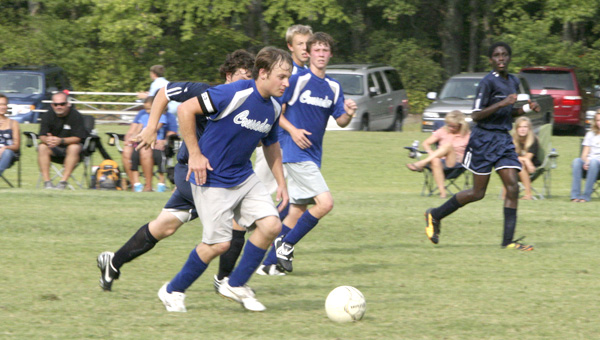 Unless a spectator arrived about 15 minutes before the kickoff of Friday afternoon’s soccer match between First Baptist and Summit Christian at Suffolk Youth Athletic Association, they wouldn’t have seen or likely known anything about a simple sign of support from one team to the other.

In a very quiet way, much closer in sentiment to a pat on the back than anything approaching a ceremony or anything else meant to be noticed, First Baptist’s two senior captains, Wes Hughes and Luke Ognibene, handed a large cardboard box to Summit’s two soccer captains during the pre-match coaches, captains and referee meeting.

The box contained gifts, specifically bags, candy and notes, from First Baptist students to the team and especially to two players on Summit’s soccer team.

A little more than two weeks ago, on Aug. 18, Summit alum and former soccer player Brian Mouring, 20, was on a camping trip with family and friends at North Carolina’s Oregon Inlet.

While swimming in the ocean, he went under a wave and never came back up. His body was found the next day about a mile away.

Brian’s two younger brothers were on the field for Summit Friday.

First Baptist and Summit, in Newport News, are opponents in a number of sports and both are small private schools, where most athletes play multiple sports. Many of the players out on the field Friday have been playing versus each other in basketball and baseball as well for the past few years.

George Martin, the Crusaders’ soccer coach, said the juniors and seniors at First Baptist, boys and girls, soccer players and others, put the gifts together.

“It was meant to just be a nice gesture from the school,” Martin said.

As it should be, the gift and its meaning took nothing away from the competitiveness of the match and Summit went on to a 9-1 win.

Summit scored four times in the last 12 minutes of the first half to gain a 6-0 halftime lead.

First Baptist (0-2) scored its first goal of the season late in the second half. Sam Barrone put a free kick into play from about 40 yards from the Summit goal. Barrone’s kick bounced into the Summit penalty box and Hughes slipped a right-footed shot between a defender and the goalkeeper.

Summit outshot the Crusaders 41-4. Colby Toler, who came on at goalie to start the second half, made eight saves in the last 40 minutes.

The Crusaders have a pair of road matches this week, starting Tuesday afternoon at Gateway.

By Jeff Findley This is Dale Earnhardt Jr.’s 11th season as a full-time driver in NASCAR’s Sprint Cup series. After... read more